Fossavatnsgangan and Vasaloppet China elected Full Members of the Federation.
The 2019/2020 season was an extra-ordinary Worldoppet season under all aspects, and so also the Annual General Meeting, that is usually taking place in June in one of the countries hosting the races, had to change format, and it was held for the first time virtually. At least one representative for each one of the 20 races were present, together with the Worldloppet President Juha Viljamaa and the CEO Epp Paal.

“This season left us all with a bitter taste, it was a hard time for all the races, both Worldloppet and the new entries of the Global Ski Marathon Calendar. We are still looking with faith at the coming season, that is still far from now, so that the situation can still evolve for the best – or at least there is time to figure out different scenarios that organizers should be prepared for” the comment of the CEO of Worldloppet Epp Paal. “It was a particular “trial year” for the Global Calendar framed by a hard season, but we already working on the coming season and found renovated interest and new enthusiasm from the Global Calendar races, so we are positive that the project will be continuing its growth”.

The agenda of the meeting was this year reduced; nevertheless, it saw the presidential election for the upcoming 4 years, and the actual President Juha Viljamaa from Lahti, Finland, being confirmed with the neat majority of votes over the new candidate, Ben Popp from the American Birkebeiner.

“We have been doing lots of new things in the past 4 years together and I am looking forward to these other 4 years at the lead of this international family, because Worldloppet is this, rather than only a Ski Federation”. The comment of the confirmed President Viljamaa.

Another big news that was decided during the meeting, is the confirmation of the new status of “Full Members” of two races that so fare were Associated Members: Vasaloppet China and Fossavatnsgangan that with this new status are entitled the right to vote during the assemblies, being entirely one of the prestigious events of the ski marathon world. Congratulations! 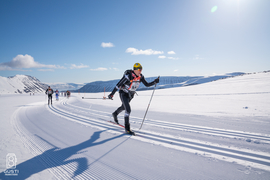 A closer look into the past season: the Global Ski Marathon calendar at its first season among lack of snow and covid-19

During the AGM, numbers and figures of the season were commented: what a Ski season, this year! One of those seasons that are hardly forgettable for the intensity of happenings that have impacted the Worldloppet and Global Ski Marathon calendar races world-wide.

Having a closer look at the season and some of the numbers: out of the 20 races, five were unfortunately cancelled due to lack of snow (König Ludwig Lauf, Sapporo International Ski Marathon, La Transjurassienne, Tartu Maraton and Finlandia Hiihto), whereas three could not take place due to the diffusion of the pandemic covid-19 (Engadin Ski Marathon, Birkebeinerrennet, Fossavantsgangan).
The same tendency is to find within the Global Ski Marathon Calendar; out of the 158 races included in the first year of the Global Calendar and Ranking, 72 could not take place, 35 of them due to covid-19. Nevertheless, a numerous participation is to find at the races that were held: the participants to this first Global Calendar season were 73208, where in a regular season they amount at around 120.000 skiers at the Worldloppet races only.

Go to the Global Calendar

Alongside with the Global Ski Marathon Calendar goes the Global ranking, that was born with the aim of helping especially recreational skiers getting their efforts recognized with seeding to the Worldloppet races. The Global Ranking main focus is not to determine best long distance skier but to give recreational skiers comparison of their achievements with the elite skiers and also in their age group.

The Ranking foresees 14 different categories divided in male and female, for 5-years-ages intervals starting with U20 up to U90 – to cover all the possible ages of skiers. Talking about overall ranking, we can find that the overall winner of the first Global Ranking is Petter Eliassen of Team Ragde Eiendom with 3648 points in total, followed by his teammates Anders Nygaard with 3601 points and Tord Asle Gjerdalen with 3569 points. In the ladies’ field, the victory goes to Lina Korsgren with 3147, followed by Visma Ski Classics winner Britta Johansson Norgen with 3104 points and U25 Category winner Ida Dahl, with 3084 points. The updated ranking with the scores of all skiers that took part to one or more Worldloppet and Global Calendar races can be found online and are consultable according different filters such as nation, gender, category, to make users’ research easier and more interesting!

Go to the Global Ranking

We have 857 guests and one member online